An Exceptional Review for My First Chronicle - James & the Dragon

Remember when I mentioned finding an author through a retweet of a retweet?

Well, I checked out the author that put out the first retweet soon after I placed How the Dragons Got Their Colors
into my reading queue. And you know what?

I was very glad I did! 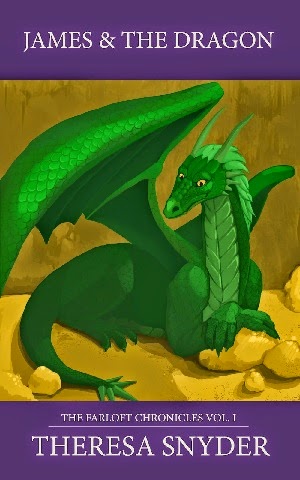 James & the Dragon is the first installment of the Farloft Chronicles, a fantasy chapter book by Theresa Snyder.

So what's it about?

Farloft is a dragon - one of the last of the great creatures that once flew freely through the skies, aiding humans
in need, and offering their guidance to those with the wisdom to listen... but things have changed. Farloft now
hides himself from humans. Their fear and ignorance has caused them to hunt and kill dragons, believing
them to be cruel and hateful beasts.

James is your average ten-year-old boy. That is, he would be, if it wasn't for a plague that swept through the
land that killed about two thirds of his village... including his family. The villagers are desperate, not even having
enough to feed their own families, due to the losses the plague has wrought, and no one is willing to take James
into their home.

One day, Farloft discovers James after an accident comes close to taking the boy's life. Farloft knows a terrible
blizzard is about to arrive in the region, and sees no choice but to take the boy into his cave in order to keep him
safe until the storm passes.

You can see why I downloaded this one. Well, you see part of the reason, that is.

The other part is that Snyder has written quite a few ebooks of both the fantasy and sci fi persuasion, and a
pretty hefty amount of them are not written for children. In truth, I was excited about all of them. They all seemed
to be great examples of fluid storytelling.

I chose this one because her twitter feed made it obvious that she had a great love of dragons, which meant her
love for them would shine through in this ebook.

And I was right.

Farloft was not only believable, but also a character that could be identified with. Everyone has felt betrayed,
forgotten, or just flat-out lonely at some point. We've also all felt the hope that this wouldn't last, that somebody
would accept us for who we are.

James brought out similar feelings. He felt lost, alone, and unwanted, yet he also had a warm heart.

Interestingly, it wasn't my intention to review James & the Dragon today. It had been in my queue for about a month,
but I had a few more to read before starting this one.

But I was falling behind.

Last night, I realized that I wasn't going to finish my current ebook in time. Because of this, I moved Snyder's
ebook up the line and resigned myself to staying up long past my normal bedtime. It was short, after all, and
since it was a children's fantasy, I figured I could have it completed in an around two hours.

I finished it in less than one.

This isn't because it was an easy read. I mean, it was, but that's not why I was able to get through it so quickly.
Rather, this ebook was filled with drama, action, and detail that allowed my eyes to race across each page while
still reading each word. The world of Farloft came alive, and the characters' emotions rang true.

After a while, I began to realize that Snyder wrote an ebook that appealed to a wide age range, even though it was
clearly written for children in the fifth grade (roughly). While the word choices were simple, they were also insightful
and necessary.

Rather, She masterfully weaved her words together in a manner that would attract more than just the age group
she focused on. I loved it, feeling as though I was standing within the world of the Farloft Chronicles, and I believe
my five year old daughter would be able to love it just as much.

That's a 30+ year age range, for those of you that are wondering. Wow!

There's just one more piece of awesomeness that I wanted to share with you:

Theresa Snyder participates in the Authorgraph program, which means that if you want to have an autographed
copy of James & the Dragon, she'll be happy to oblige! Simply go to the Farloft's Rhetoric  page and find the
Authorgraph box on her sidebar. Choose your book, and voila!

How awesome is that?!

James & the Dragon can be found on Kindle, Nook, and Smashwords, as well as Scribd.