Trollik, the black dragon, asked me to have my scribe write down how we met,
and our adventure together when I was on my youngling dragon quest years ago.

It just so happens that my scribe, Theresa, has completed the tale, and it is
Trollik's Hatchday!
We dragons have great timing... 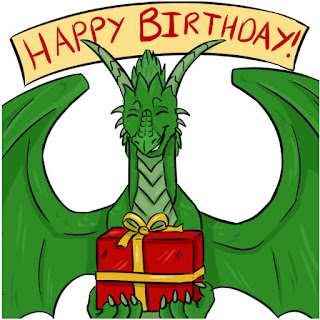 Now on with the story...

Farloft watched as the large black dragon glided around the edge of the high beach cliff. This was the third day of following the dragon. His dark body, with dark blue fur accents on his tail, made him easy to spot as he sailed along the shoreline. Farloft was fascinated by the dragon’s actions. At first, he appeared to be searching for food in the many caves hollowed out of the chalk that rose up from the beach almost four-hundred feet. However, with a bit more observation Farloft saw the dragon fishing for his meals in the ocean and along the plain which topped the cliff, yet he still searched the cliff caves tirelessly. Curiosity had gripped Farloft. He wanted to know what the dragon was doing.
Read more »
Posted by Theresa Snyder (3su) at 9:44 AM No comments: Links to this post

Bluekite, my artist friend, has been hard at it trying to catch me in my many moods for posterity.

I think she has done such a fine job that I am going to put them here for you all to see and download if you like.

In fact, I have a Coloring Contest. It will make the upcoming fall months of rain and school drudgery a bit more FUN!

Congratulations to My Coloring Contest Winner of the Month!

Congratulations to Mol Resa!
*Raises wings in a salute*
He is one of my international readers from France.

Thank you for entering and winning my Coloring Contest for the month of January. *grins*

He received my first two Farloft Chronicles to read on his kindle.
*They are available for any device*

Why don't you Enter to Win? 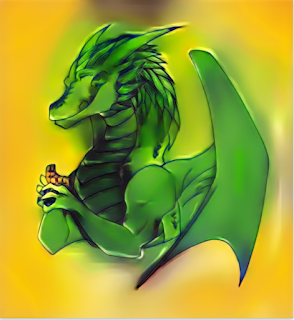 Art by Bluekite Falls of DA
Coloring by Mol Resa

Posted by Theresa Snyder (3su) at 9:30 AM No comments: Links to this post 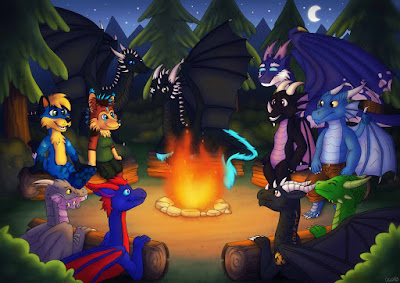 FanArt is such a thrill to receive. BlackDragonCZ surprised us with this yesterday.Commissioned by BlackDragonCZ and Executed by OggytheFox.Oggy captured us all by the campfire one night with old friends and new.Such a lot of work, but such a delight to see.Visit Oggy at Furaffinity

Posted by Theresa Snyder (3su) at 7:09 AM No comments: Links to this post

FanFiction Inspired by "A Gathering of Dragons"

I am pleased to present a piece of fanfiction by Elizabeth Babicz. It was inspired by my latest story "A Gathering of Dragons" which Theresa is posting on her Serial Story Blog.

Elizabeth not only wrote the story, she did the art as well. Here is her piece:


The Tale of Veryn


The night was filled with the deafening sound of crickets chirping and the fire cracking between the dark red dragoness and Farloft. She didn’t seem to be bothered by the silence, but it was enough to drive the talkative old dragon insane. Finally, unable to take it anymore, the words were pried from the old dragon’s snout.

“Now that I’ve helped you, I think it’s fair that you explain exactly who you are.”

Read more »
Posted by Theresa Snyder (3su) at 8:31 PM No comments: Links to this post

Here is the audio book version of James & the Dragon, Vol. 1 of The Farloft Chronicles.
Volume 1-6 Available Everywhere in eBook and Paperback

Theresa is always spoiling me.
She had Wolfool of Deviant Art do my Portraits for Christmas.
Check it out! 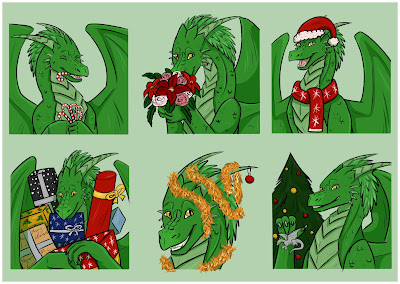 Posted by Theresa Snyder (3su) at 12:52 PM No comments: Links to this post