“Hold your paw right there,” Anna said to her father.

Farloft placed one large green paw on the paper to hold it in place while Anna wrapped the ribbon around the package. It was handy having a shape-shifting-dragon for a daughter. Her human hands were made for this type of work, unlike his huge paws.

The two of them were quickly wrapping presents while everyone else was off picking up the company. Clearair’s first stop was to pick up Theresa, the healer and Farloft’s best friend. Then they would continue to the castle to pick up Sarah, Theresa’s niece and the sorcerous in the kingdom.

James had left to pick up Adrian, the bard.

They were all going to celebrate Christmas in the dragon family’s lair where there was enough room for all.
Read more »
Posted by Theresa Snyder (3su) at 9:36 AM No comments: Links to this post

Darris or @dwdraakken did me the honor of commissioning this piece from Kitsooki of
Theresa, me and him together. 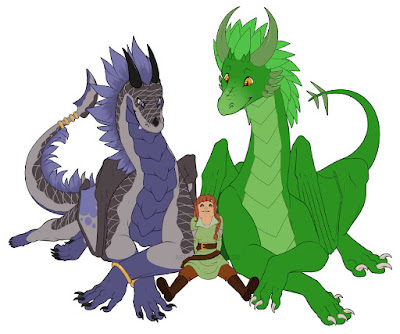 This is the cutest FanArt I have ever received.
Carol Marrs Phipps took Kitsooki's drawing of me under the Christmas tree
and put it in a Snow Globe.

Posted by Theresa Snyder (3su) at 8:52 AM No comments: Links to this post