This is the second winner of the Raffle to have my scribe write a story with one of his friends in a starring role. Storm Gryphon wanted something magical and to show that gryphons have a 'silly' side. I think they are a bit 'cheeky' too. *grins toothily*

Farloft lay on the rock shelf above the entrance to his cave. His belly was turned up toward the sky and his eyes were mere slits as he basked in the mid-day sun.

Farloft didn’t have to look to know who had flown in on silent wings and landed below at the entrance to his cave. It would be Storm Gryphon. He was the only one who could get past Farloft’s exceptional hearing. His silent and stealthy ways were the reason the king employed him as scout and sometimes spy for the kingdom.

“What do you want, Bird?” Farloft growled. He did not take well to his nap being interrupted.

“Your attention, or I would not have come, Lazy Old Lizard,” the gryphon said testily.


The dragon snorted at the gryphon’s taunted. This was an old game, one both of them had played many times before. In truth, the dragon liked the gryphon, and the gryphon felt the same about the dragon, but somehow that had gotten lost in the desire to best one-another in name-calling.

“Go away, or I shall roast you like a Fall Festival turkey. Can’t you see I am resting?” ‘Turkey’ was not as good an insult as ‘Lazy Old Lizard.’ He would have to think of something with more of a zing to it.

Farloft didn’t hear the gryphon leaving. He rolled his head to the side and opened one golden eye, just a slit in order to see Storm. The gryphon was obviously on patrol. His beak was painted and he sported his leather headband with the trail of colored feathers he had taken as trophies off other birds he had bested over the years. He was equipped with a small tubular pack, strapped at his back, where he carried his potions, trinkets, scrolls he was reading, and the stone to sharpen the spear he carried when on duty.

“I need your help, Big Green.” Storm sat down on his haunches and leaned on his spear to wait for the dragon to pay attention.

The gryphon needed his help? Farloft rolled over and came to his feet. He hopped down off the ledge to come and sit across from Storm. “What could a capable bird like yourself possibly need with a big lazy lizard like me?” he asked with a grin.

“I have spotted scouts from the Kingdom of Jaldraak. They are coming to Kerth through the canyon from Baldar.” Storm leaned forward on his spear. The ribbons, feathers and ornamental beads attached to its handle swayed invitingly in the afternoon breeze.

They caught Farloft’s eye. “You have added to your hoard,” he commented admiring the bright beads.

Storm waved the spear before the dragon. “Pay attention, Lizard!”

“I am,” Farloft answered gruffly, drawing his eyes back to the gryphon. “Some travelers from Jaldraak have you spooked, Chicken.” He grinned. That one had a nice ring to it. “I heard you.”

The gryphon had the dragon’s full attention now.

“Hundreds on the Baldar side of the canyon. They seem to be gathering.”

“Have you gone hard of hearing in your old age, Dinosaur Descendant?” Storm sprang to his feet. “There is an invading horde at our gates!”

“Well then, I guess we had best go check it out, Hybrid.”

The gryphon wasn’t really a hybrid, but he looked like a cross between a cat and a bird.

Farloft rose and with one mighty leap, took to the sky. “What’s keeping you, Lead Feathers?” he crowed at the gryphon below.

“Indeed,” Storm said, as he vaulted off the cliff and into the air to follow Farloft.

Storm lay flat on his belly as he surveyed the canyon from the mountainside. He was counting. “There are more than I thought.”

“You should go warn the King - have him muster the troops.” Farloft frowned at the number of invaders in the camp. It was a larger force than Storm described on the flight over. “I can stay here and if they start to move, I’ll roast a few to discourage their advance.”

“There isn’t time to go for help.” The gryphon pointed with a wing. “They’re on the move!”

Farloft had to admit it looked as though they were starting to form up in ranks – foot soldiers with pikes and shields in the front, archers and swordsman, followed by knights on horseback.

“I have an idea.” Storm took off his pack and began to dig through it.

When he didn’t say anything more, Farloft sighed heavily. “Are you going to tell me your plan or are you keeping it a secret, Bird Brain?” In spite of the situation he grinned when Storm looked up at him with a glint in his eyes.

“That was a good one, Knight Chaser.” The gryphon stuck out his front foot. He held a leather pouch between his talons. “I have powder and between yours and my magic we can seal off the canyon with an avalanche. Stop them in their tracks.”

“No we can’t,” Farloft frowned. “You know the King wants that canyon left open for the escaping immigrants from Baldar.”

Storm’s tail twitched in agitation. “We could seal it, kill the survivors on the Baldar side and then dig it back out.”

“We?” Farloft asked with a wrinkled brow. His neck spikes raised in question. He knew the gryphon was no digger. He shook his head. “There has to be another way without infuriating the King.”

Storm stuffed the pouch of magic powder back in his pack and they continued to study the troops below as they formed up into ranks.

“I have an idea…” Farloft rose up on his back feet and peered over the rocks below to get a better view of the canyon. “Can you really control the weather? Because I have heard you say you can, but I have never seen you do it. I knew a wizard once who could throw lightning bolts, but not a full-fledged storm… Of course…I suppose…”

“Damn-it, Lose Tongue, stop rambling and spit it out,” the gryphon said in an irritated tone. The dragon was the longest winded creature on the seven continents of this world. “Of course, I can control the weather! Why do you think they call me Storm?” He ruffled his feathers. “What do you have in mind?”

Farloft lowered his bulk down to bring himself eye-to-eye with the gryphon. His neck spikes went down flat against his scally neck as he said in a conspiring tone. “Just a little flash flood…” he grinned, “or maybe a big flash flood if you can manage it, Raindrop.”

Storm peered at Farlof through squinted eyes. “Oh, I can manage it, Scale-back.”

“Wait until the ones in the rear make it into the canyon,” Farloft cautioned.

Storm was sitting on his haunches holding what looked like a ball of multi-colored energy between the bird talons of his front feet. He had started conjuring the weather via a spell, but soon the lights started forming and then off in the distance Farloft heard the roll of thunder answering the gryphon’s call. Out of a clear blue, late afternoon sky, clouds began to gather over the canyon. They rolled and swirled like water boiling in a pot. The thunder boomed and a bolt of lightning crackled and escaped from Storm’s talon’s into the gray clouds above.

“I’m only getting started,” Storm churred softly, as he let another bolt of lightning escape his grasp.

Down below in the canyon the soldiers, knights and squires were getting wet. For now, it was a light rainfall – an inconvenience, no more.

Storm pulled at the ball of energy in his hands and they separated into three separate spires, white, blue and yellow. He flicked each one off a talon and they shot like rockets toward the clouds above.

“You best find some shelter, Scaly. I won’t be able to stop this once it is fully blown.” Storm sprang into the air, his wings fluttered open. The rain that had begun to fall trickled off his feathers like water over mossy stones in a creek. “Stay on the ground,” he ordered before he turned toward the waiting clouds above their heads.

Farloft watched as the gryphon spun through the storm gathering up the edges of it as though it were a giant blanket he was folding. He pulled it in and layered it deeper and deeper, until the rain was pouring down like water from an upturned bucket. The darkest area of the storm was at the far end of the canyon where the last of the troops had just entered. The thunder rumbled like the roll of giant’s war drums on the move followed by the crackle of lightning across the canyon from wall to wall. Horses screamed in fright and men cowered behind boulders as if hiding from the storm, but there was no hiding from Storm!

The gryphon pulled on all his magical resources. He swooped and curled through the storm, bringing it into its full potential. At the far end of the canyon, there was one last mighty clap of thunder – a sheet of lightning with fingers spread down the full length of the canyon – and then the heavens opened up and the flood descended. It rushed down the canyon from the far end as though those thunderous giants had opened the slough on a flood gate. It poured down the canyon picking up boulders, pulling trees from their tenacious roots along the canyon walls. It picked up men and horses alike and washed them down the valley between the high rock walls like a bucket of used mop water down a drain hole.

Farloft couldn’t believe his eyes. He hadn’t needed to voice a single roar, roast a single man, or menace a single horse. Storm’s deluge was washing the canyon clean of any threat to the kingdom. Oh, how he wished Storm had been among the warriors when he and his dragon clan had helped the King of Kerth protect their home years ago when they battled the army of the Baldar King. Perhaps then, Farloft would have still had a clan to call his own. So many good men and dragons had died in that war.

It was amazing how fast the flood swept the threat of invasion away. One moment the rain was pelting down and the water surging though the canyon, the next the flood had subsided and there was nothing left except the bodies of the fallen.

Storm landed beside Farloft as the clouds began to dissipate. He began to preen his wing.

“Honestly…Bird!” Farloft scolded. “Are you really going to stand here and clean after drowning the full standing army of Jaldraak?”

“How else do you expect me to see you safely home, Old Lizard?” He drew another wing feather through his beak clearing it of accumulated water. “I can’t fly far soaking like this.” He held out his wings to show off matted feathers.

“I could run a bit of air over my internal furnace and dry you,” Farloft offered with an innocent grin. “Just a slight roasting.”

“Blow me, Dragon Breath? Not in your lifetime…” 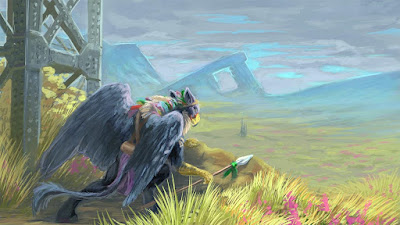