FanFiction Inspired by "A Gathering of Dragons"

I am pleased to present a piece of fanfiction by Elizabeth Babicz. It was inspired by my latest story "A Gathering of Dragons" which Theresa is posting on her Serial Story Blog.

Elizabeth not only wrote the story, she did the art as well. Here is her piece:


The Tale of Veryn


The night was filled with the deafening sound of crickets chirping and the fire cracking between the dark red dragoness and Farloft. She didn’t seem to be bothered by the silence, but it was enough to drive the talkative old dragon insane. Finally, unable to take it anymore, the words were pried from the old dragon’s snout.

“Now that I’ve helped you, I think it’s fair that you explain exactly who you are.”


The young dragoness shot a daring gaze at her elder before piping up, “It’s none of your concern who I am old scales...” she paused for a moment.

Farloft opened his mouth, preparing a rebuttal, but the dragoness continued.

“...but I fear that if I do not speak to anybody, my past may consume me and turn me into something much worse…” Her gaze dropped to the grass as she coyly drug her claw through the dirt.

Farloft softly sighed, shifted in his spot getting into a comfortable position, and stretched out his paw towards her, gesturing her to speak. “I am here young one, please, explain your story.” He lowered his paw and softly smiled.

The young dragoness mirrored Farloft’s smile and let out a deep sigh before speaking. “It began when I was only a hatchling…”

My father was a fierce Wyvern from the far North and my mother was a Western dragon. He never explained to me how he had met my mother, but from how he would say her name, or tell stories of her, I knew that he cared for her greatly.


I would like to believe that my father was aggressive because my mother passed and was not around to comfort him, rather than think that it was just his natural demeanor. For 60 years, my father had no problems with bringing me sheep, cattle or boars that I needed to eat. I knew that he cared for me deeply. He would tell me “Now Veryn, you must eat plenty of food so that you can grow big and strong like m-”

Farloft interrupted with a chuckle that had escaped even though he fought to suppress it. “I’m terribly sorry to laugh! I mean no harm, but your name is VERYN? Like, WYVERN?”
“Yes, my father was not the most creative dragon around, but it’s my name.” Though smiling, Veryn growled in agitation.

Veryn relaxed and closed her eyes, continuing on:

Now at the time I didn’t understand, but I quickly learned that after a few generations of stealing the neighboring kingdom’s livestock, they would grow more and more angry with us.

One cloudy day in particular, I walked to the entrance of our cave. My father was walking up the hill, a large cow in tow, but not far behind him was a group of humans. Alerting my father, he quickly dropped the cow and frantically pushed me to the back of the cave.

“You must hide! Quickly! Who knows what those humans will do to you, please!” he shouted at me.

I curled up tightly behind a pile of rocks and squeezed my eyes shut. I heard the sound of my father roaring and shouting for the men to leave. His pleas were in vain, of course; the men’s judgement was clouded by hate and anger towards my father and they were merciless…

There was roaring and shouting... and then, silence. I dared not move in case the group was still wandering around the cave…

After laying for what felt like an eternity, I finally poked my head over the rocks and observed the cave. There was blood everywhere, even on the dimly lit cave floor I could tell puddles of blood from water.

I called for my father, but I had never heard a reply. I dragged a few men out from the cave to leave them at the entrance. Afterwards I curled up against the same pile of rocks that I had hidden behind, but faced the cave entrance so that I could keep an eye out for my father.

Hearing footsteps I was never greeted by my father, but rather, a smaller group of men had returned with a wagon and chains. They must have snuck up on me while I had been sleeping and hit me upside the head, leaving me unconscious. When I finally awoke, I heard the clatter of chains around me. I tried lifting my head, only to have it fall to the cold floor. They had restrained my horns with gold cuffs and chains attaching to the ground. I could lift my head, but stretching my neck was not possible. They had also restrained my front limbs as well as my tail. Given that my tail has spikes, it was a smart move on their part. What wasn’t wise was that they had forgotten my back feet. For the life of me I can’t think of why they wouldn’t. Do they think I kick in my sleep?
Veryn wrinkled her nose and scoffed at the thought.

Little did they know that it would be their own demise. When it came feeding time I pretended to be asleep. The men laughed at how they thought they had ‘caught a mighty beast’ and how they were going to ‘tame’ me. I tried to remain calm, but then one of the brutes chucked a fish at my face and my eyes snapped open. I let out a deep growl. It seemed to have caught them off guard, but they entered a fighting stance. They wanted a fight? They got one.

I stood as tall as my chains would allow me and flapped my wings, blowing gusts of wind at the two men. I had never flown in my life before, so my wings weren’t strong enough and it barely sent them stumbling. No good. They were moving in on me, incredibly angry, and pulled swords out from their hilts. As a last resort I opened my mouth, unveiling my sharp teeth, in an attempt to frighten them. At first, they were intimidated, but because I could back up my display with fire, they called my bluff and continued their pursuit.

I couldn’t think of anything else now. I was out of ideas. Finally, I unleashed the mightiest roar that I could from the very bottom of my being. Their terrified looks only fueled my energy to escape. I leaned onto my wings, lifted my front limbs as high as the chains would let me, and reached my free back feet forward, grabbing the men and holding them between my talons. It felt so good to squeeze them, like it somehow made up for what the group had done to my father and me. Before I continued into something I couldn’t turn back from, I chucked the men across the room and focused on my own escape. I yanked. I tugged. I pulled. Eventually, I broke free of their weak human bindings, only the cuffs remaining, and I made my escape.

Still unable to fly, I ran. I ran as far as my legs could carry me. And when I couldn’t run anymore, I plopped to the ground and gave up. I was exhausted, hungry, thirsty and lonely. That is, until you found me…

Farloft smiled proudly and tried to assure the young dragoness. “Not all humans are like this Veryn, I’m so sorry that this happened to you. From now on, I am here to guide you.”

“Thank you Farloft, I look forward to helping you gather as many dragons for your cause, as well as being there to fight myself.” 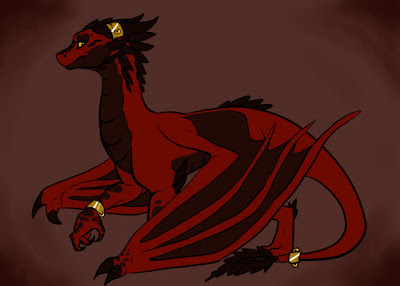